Register for GST Online From Comfort of Your Home

We Will Take Care of Filing of Application for GST Registration and Registration of GST will Completely Online.

Get your GST Registration Status Without Visiting any Office We Will Update you.

File your GST Return from Your Home. Choose Plan From here we will take care off all. Get Easy GST return filing with "Law Epic"

Get Help Regarding GST Registration and GST Return Filing Online from our Dedicated Team.

Our team of highly trained doctors, with countless hours of experience, is here to give you the best medical service possible

We will Make it Easy For you We offer you easy GSTIN Cancellation / Surrender Service.

Our dedicated Team will Done it for you. Examination of records, returns and other documents Will be done for you.

Our team of highly trained tax Experts , with countless hours of experience, is here to give you the best legal service possible

Introducing Goods and Services Tax (GST) has been a big tax reform in India. And so much time has passed since its introduction that questions like “what is GST Registration” do not sound right. So here is a brief introduction

GST stands for Goods and Services Tax. It is an Indirect tax which introduced to replacing a host of other Indirect taxes such as value added tax, service tax, purchase tax, excise duty, and so on. GST levied on the supply of certain goods and services in India. It is one tax that is applicable all over India.

GST is a consumption based tax levied on sale, manufacture and consumption on goods & services at a national level. This tax will be substitute for all indirect tax levied by state and central government. Exports and direct tax like income tax, corporate tax and capital gain tax will not be affected by GST.

The idea of moving towards GST was first mooted by the then Union Finance Minister in his Budget speech for 2006-07. Initially, it was proposed that GST would be introduced from 1st April 2010.The Empowered Committee of State Finance Ministers (EC) which had formulated the design of State VAT was requested to come up with a roadmap and structure for GST.

Joint Working Groups of officials having representatives of the States as well as the Centre were set up to examine various aspects of GST and draw up reports specifically on exemptions and thresholds, taxation of services and taxation of inter-State supplies. Based on discussions within and between it and the Central Government, the EC released its First Discussion Paper (FDP) on the GST in November, 2009. This spelt out features of the proposed GST and has formed the basis for discussion between the Centre and the States so far.

The introduction of the Goods and Services Tax (GST) is a very significant step in the field of indirect tax reforms in India. By amalgamating a large number of Central and State taxes into a single tax, GST will mitigate ill effects of cascading or double taxation in a major way and pave the way for a common national market.

From the consumers point of view, the biggest advantage would be in terms of reduction in the overall tax burden on goods, which is currently estimated to be around 25%-30%. It would also imply that the actual burden of indirect taxes on goods and services would be much more transparent to the consumer. Introduction of GST would also make Indian products competitive in the domestic and international markets owing to the full neutralization of input taxes across the value chain of production and distribution.

Studies show that this would have a boosting impact on economic growth. Last but not the least, this tax, because of its transparent and self-policing character, would be easier to administer. It would also encourage a shift from the informal to formal economy. The government proposes to introduce GST with effect from 1st July 2017.


There are four different types of GST as listed below:

SGST is defined as one of the two taxes imposed on transactions of goods and services of every state. Levied by State Government of every state, SGST replaces every kind of existing state tax that include Sales Tax, Entertainment Tax, VAT, Entry Tax, etc. Under SGST, the State Government can claim the earned revenue.

IGST is applied on the interstate transactions of goods and services. IGST is also applicable on the goods being that are imported to distribute among the respective states. The IGST is levied when the movement of products and services occur from one state to another.

Applicable on the Intra UT supply of goods and services, the aim to impose UTGST is to apply a collection of tax to provide benefits as same as SGST. The UTGST is applicable to five Union Territories namely Lakshadweep, Damn and Diu, Dadra and Nagar Haveli, Andaman and Nicobar Islands, and Chandigarh.

The Main Features of GST

The main features of the GST are :

There are four slabs categorized based on goods and services, as proposed by the Government:

How to Register For GST 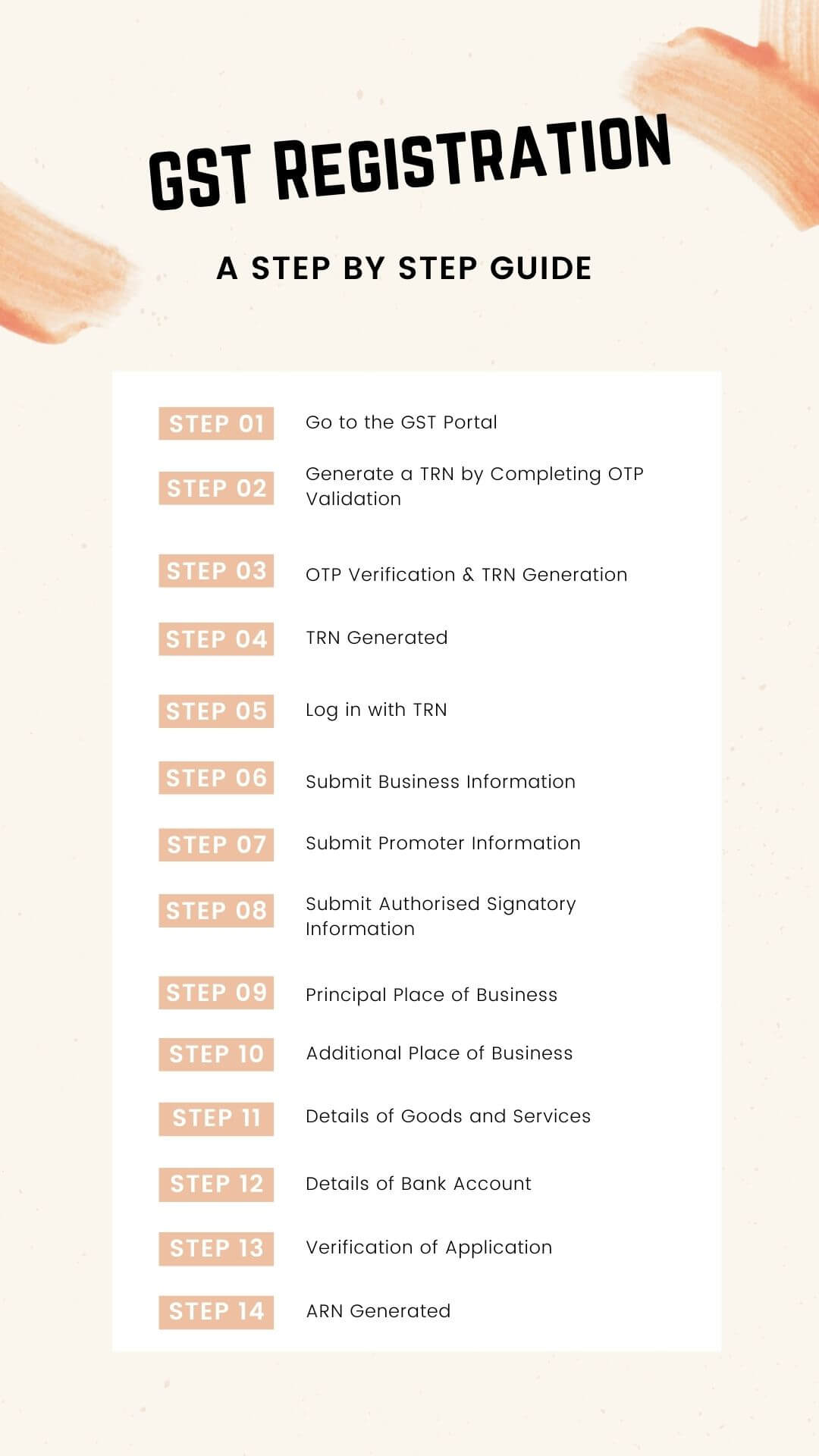 Every supplier of goods or services is required to obtain registration in the State and Union Territory from where he makes a taxable supply if his aggregate turnover exceeds ₹ 40 Lakh for goods in a Financial Year. In the case of services, the threshold limit is ₹ 20 Lakh. However, compulsory registration under GST has required if the person makes inter-state supplies i.e., the threshold limit of ₹ 40 Lakh and ₹ 20 Lakh shall not apply for registration in this case.

The step by step procedure for registration under GST are as follows:

1. Is it necessary for all traders to register under the GST?

All traders who earn turnovers in excess of Rs.20 lakh in a financial year will have to register under the Goods and Services Tax.

2. Do small traders have a separate scheme to pay taxes?

Yes, small traders can make the most of the composition levy in case their turnover is less than Rs.75 lakh. For certain special states, this limit is Rs.50 lakh.

3. What are the states with a turnover limit at Rs.50 lakh for composition levy?

4. What is the composition levy tax rate?

5. Who is not eligible for the composition scheme?

6. What is the Eligibility Criteria for GST?

Candidates applying for GST must be age__limit. Candidates should hold __education in any reputation university/institution. Nationality: Candidates must be a citizen of India only and for more details check our website fresherslive.

7. What is Goods and Services Tax Identification Number (GSTIN)?

8. How many types are there in GST?

9. Are there consequences of not paying GST?

10. What products are exempted from GST?

How To Prepare For PCS(J)- Judicial Service Examination

ABOUT US
Law Epic is legal information and news website, We publish articles, blogs, notes, guides for competitive exams.
Contact us: [email protected]
FOLLOW US
© 2020-2022 - All Rights Reserved @Law Epic