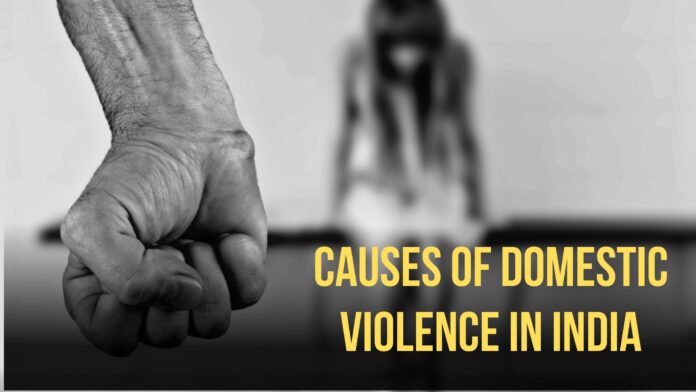 What is Domestic Violence?

We all know that Domestic Violence means the violence suffered by an individual of their biological relatives but it specifically mentioned that this violence is suffered by women from the male members or relatives in her family.

Domestic Violence can happen in heterosexual and same-sex relationships. It simply states that in a relationship or marriage, one or both of the partners uses physical, sexual or psychological violence to try to get power or control over the other or due to losing their temper.

We can also define domestic violence as a pattern of behaviour in any relationship which is used to maintain power and control over the close partner. We already studied that domestic violence is physical, sexual, emotional or economic actions or threats of actions that influence another person. Domestic Violence can happen to any person either men or women. But most of the time the violence suffered by women happens of race, age, sexual orientation, religion etc. It can start within a scope of relationships including those couples who are married, living together and dating each other.

In which Section is Domestic Violence defined?

This Section generally talks about the cruelty to women that is done by the Husband or relative of the Husband. The Punishment is there if the husband is done any cruelty to the wife so he shall be punished with imprisonment for a term which may extend to three years and he shall also be liable to a fine.

It clearly states that the purpose of this section, cruelty means:-

I)Any wrong behaviour is conduct which is of such a nature as is likely to drive the woman to commit suicide or to cause grave injury or danger to the life, and health (physical or mental ) of the woman.

CAUSES OF DOMESTIC VIOLENCE IN INDIA

It is a combination of various religious, sociological or behavioural and cultural factors that leads to the performing of Domestic Violence against women.

The following Causes are there of Domestic Violence in India:-

1)Cultural Factors:- This factor leads to domestic violence including the desire for a male child. This compulsion is resulting from the lack of awareness and the Basic part of male superiority leads to perform of domestic violence against women.

2)Religious Factors:- This factor is a precise form of domination on women, if it’s not direct and strong, it reflects in the religious holy. This also contributes to the performing of domestic violence against women.

3)Dowry:- This factor is a form of socio-cultural factor. But it is very important to mention separately because of the uncontrolled domestic violence cases resulting from illegal demand of dowry. This was accepted by the parliament also because most of the dowry-related domestic violence has made a separate head in the abuse resulting in domestic violence under the Domestic Violence Act.

4)Sociological or Behavioural Factors:- These types of factors include those factors such as anger issues, poverty/economic hardship, aggressive attitude, the difference in status, drug addiction etc. The Negligent Act of conjugal responsibilities due to extra-marital affairs or lack of trust also gives domestic violence.

In this case, the three judges’ bench is there and here are the facts of this case:-

The Petitioner that is Rupali Devi who had her parental house in Deoria, Uttar Pradesh was married to Respondent Number 2 in December 1997 who used to live in Mau along with his family members.

At the time of marriage, Sufficient cash and dowry were given but the accused person is not satisfied with that money and he started maltreating and harassing the Rupali Devi in her sasural and his on account of demand of Rs 2 lacs in cash and a Car. After all this Rupali has informed her father about the same. His father came to Mau and tried to calm the accused persons, who remained immovable on their demand.

In 12th May, 1998 Rupali Devi gave birth to a child. But after the birth of child, the Rupali Devi harassment continued. When she again became pregnant his husband and his relatives accepted to Dr Saxena that she got her aborted.

In July 2002, the Rupali Devi thrown out of her matrimonial home and the accused kept the male child with them. Her father took her to Deoria and he continuously tried to calm the accused person.

In 14th April 2005, Rupali Devi again went to her sasural, but after reaching there she saw that one stranger woman is there and she was also living with the family of the accused and when she asked to husband so he said that she was second wife of Rupali Devi’s Husband. When Rupali Devi protested, the husband beat her and he confined her in a room and made her to sign some blank papers.

Whether A woman forced to leave her matrimonial home on account of acts and conduct that form cruelty can initiate and access the legal process within the jurisdiction of the courts where she is forced to take shelter with the parents or other family members.

In this case, the court held that at the place where the wife takes shelter after leaving or driven away from the matrimonial home on account of acts of cruelty which is committed by the husband or his relatives and they have also jurisdiction to entertain a complaint alleging commission the offences which falls under Section-498A of IPC.[1]

At the time of marriage between husband and deceased wife, the demand for jewellery and cash which was made by the latter’s family. The family of the deceased wife couldn’t arrange the whole demand at the time of marriage and they promised that they pay the balance soon. In the meantime, her husband was working in abroad and he left India, he would leave the deceased wife with her parents. The deceased wife was insulted continuously, her humiliated and tortured because the demand was not fulfilled. When it became unbearable, the deceased wife left her matrimonial home. But after that her father-in-law went to take her back and beat her on public road. When deceased wife’s parents heard this, they went to the house where they were insulted and abused. On 9th December,1992 they received the information that their daughter had committed suicide. A charge sheet was filed against the husband and his parents. But the husband was acquitted.

Whether or not a case is made under the sections of 304B and 498A against any of the accused.

There are two important ingredients to be proved under Section-304B a women must have been soon before her death. It’s subjected to cruelty or harassment for or in connection with the demand of dowry. Under Section-113B of Indian Evidences Act, the presumption cannot be raised unless these are proved. On Proof of the important mentioned, it becomes obligatory on the court to raise a presumption that the accused which is caused the dowry death.

MISUSE OF SECTION 498A

Now we talk about when cruelty is done by women against their husbands.

In the Modern Era, A violation of this section is done by women by creating light-hearted false allegations against their husbands because of getting some money or just paining the family. This section’s violence is increasing quickly and the ladies usually arrest their husbands.

Generally Section 498A was inserted into the legal framework and the idea of protecting the women from cruelty, harassment and other offences. But when cross- investigations are performed to test the validity of these laws , the number of acquittals which is related to sentence was greater. After that who brought 498A into action it is a shield against cruelty of women that is Supreme Court considers as legal terrorism because misuse of this section reduces its true credibility. That is there are various reasons for calling this section an anti-male law.

In this case, there are few steps taken by the court to prevent the misuse of Section-498A and that is :-

1)FIR Should not be reported regularly.

2)Police should be try to carefully screen complaints and then register FIR.

3)Without the prior authorisation of DCP/ADDI No case should be filed under Section-498A.

4)Before FIR registration, all possible reunion efforts should be made and if it is found that there is no possibility of settlement, important steps should be taken in the first time to ensure that stridhan and dowry cases are returned to the complainant.

5)After a proper investigation made with the prior approval of the ACP / DCP has been performed only then the arrest of the important accused can only be made.

6)In the case of security accused such as in laws prior approval of DCP should be there on the file.[3]

SURVEY OF CRUELTY AGAINST HUSBAND BY WIFE

There are some grounds of cruelty against the husband where wife is done harassment with her husband.

1)Wife opting out for second marriage without filing the divorce proceedings.

This article was written by Yathaarth Raj Khurana as a sample post for Law Epic.

Team Law Epichttps://lawepic.com
Writer of this website are backbone of Law Epic. We try to do better to provide good and authentic information to our readers. Keep Reading....
RELATED ARTICLES
- Advertisment -